← more from
The Orchard
Get fresh music recommendations delivered to your inbox every Friday.
We've updated our Terms of Use. You can review the changes here.

You Can't Steal My Joy 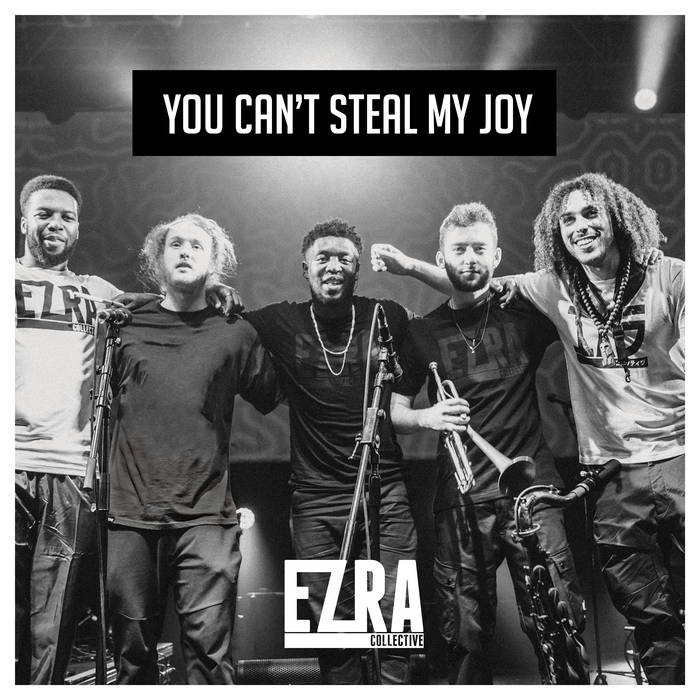 hverheijaccount Smooth is the sound, sweet is the music playing round. This is a jazz-fusion gem! Favorite track: Reason in Disguise feat. Jorja Smith.

Ashley Harding I saw Ezra Collective play in New York -- one of the last shows I attended before things locked down. As the album title suggests, this is joyous, riotously fun music that never fails to elevate my spirits, even in trying times. Favorite track: People Saved.

lI0 What a soulful mood ! Loving all the album's vibes the Collective introduced here. Thanks a lot guys ! Favorite track: Reason in Disguise feat. Jorja Smith.

Ezra Collective
‘You Can’t Steal My Joy’ (Enter The Jungle)


You Can’t Steal My Joy is an exuberant, defiant debut album that’s destined to cement Ezra Collective’s status as one of the UK’s most exciting groups.

The record features friends and fans, Loyle Carner, KOKOROKO and Jorja Smith, and is preceded by lead single and full-blown banger, Quest For Coin.

Ezra Collective’s 2017 EP, Juan Pablo: The Philosopher, won ‘Best Jazz Album’ at Gilles Peterson’s Worldwide Awards and the band picked up ‘Best UK Jazz Act’ and ‘Live Experience Of The Year’ at the 2018 Jazz FM Awards. They played Quincy Jones’ birthday party and recently completed a mosh-pit-filled and completely sold out UK tour before headlining Winter JazzFest in New York. Ezra Collective’s forthcoming gigs include All Point East, Lamar Tree and Green Man festivals and full headline tour of the UK culminating at The Roundhouse in London for November 2019.

"Growing up as young people in London has challenges but, rather than focus on all the negativity surrounding us, we’ve decided to focus on the positives”, explains Femi. “You can steal a lot of things from us - our ability to travel freely, our access to education, our right to a level playing field, even our ability to live life at its full potential - but as long as we don’t forget our core truth, You Can’t Steal Our Joy.”

Ezra Collective bring the fire on a stunning debut album // Crack
Thrilling and vital /// Q
A real coming of age /// MOJO
An urgent, free-wheeling bundle of fun /// NME
Ezra Collective have marked themselves out from the crowd with their genre-bridging prowess /// The Guardian
the sound of London in 2019 distilled and put down on record /// Clash At the heart of a bubbling scene without a point of entry for many, Ezra Collective stand with their arms wide open /// Loud & Quiet
British rave-jazz moves onwards and upwards /// The Observer
Potent, rebellious, and uplifting /// Dork
There is a lean exuberance to this band that demands a dancing response /// Rolling Stone
One of the liveliest groups to emerge from London’s jazz renaissance /// New York Times

Ezra Collective’s new era, a venture in discovered maturity and raised stakes, will be defined by the anticipated second album.

'Where I’m Meant To Be' is a thumping celebration of life.

A natural product of years improvising together on-stage, the album will light up sweaty dance floors and soundtrack dinner parties in equal measure. ... more

Bandcamp Daily  your guide to the world of Bandcamp